While Bill was gone, Elsie, and Gus had to put up with me being their primary care-giver. Some of it worked out well, and some of it didn't.

Bill wakes up, and gets out of bed earlier than I do, and he is usually the one to serve the cats breakfast. With him not here, Elsie was not a fan of having to wait for me. She usually woke me up by, sitting next to my head, and staring at me. If I didn't sense her presence, she would emit one yowl, if that didn't work, she would repeatedly pat my cheek with her paw. It was sort of cute the first time or two, after that, not so much.


With all of the winter weather we received, they didn't want to go out much. Gus, and Elsie would get their collars put on, I would open the hatch, they would meander into the cockpit, walk to the back of the boat, sniff the cold air, put a paw into the snow, and turn around to race each other back inside. Usually, they didn't even ask to go back out the rest of the day. The indoor activities included, trading off who got to sleep inside the preferred shark bed, who got the box by the heater, who claimed Dad's shirt on the bed, who could use which catbox first, who could bat each other in the face till the other gave up, and who could eat the kitty kibble down to the bottom before the other. What fun!


Gus surprised me one evening. He has never been a lap cat, he doesn't like to be held, and will only tolerate it for very brief periods of time. I was watching a movie on my laptop, and Gus jumped up on the settee, and plopped down in my lap. He adjusted a bit, stood up circled around, and settled back down. Gus stayed there for hours! I was stunned, but I took advantage of the kitty love, and he took advantage of the head scratches. 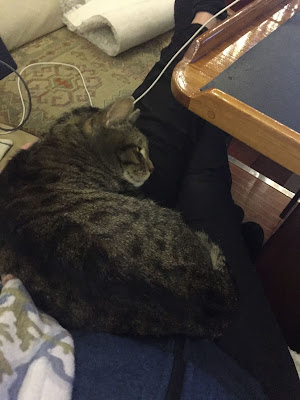 I assume he needed a bit of reassurance, with Dad being gone for 2 weeks.

Bill finally made it through the Seattle Snowpocalypse, and is back onboard. All's right with the world again. That means I don't have to get up for kitty feedings, but it also means I probably won't get Gus lap snuggles either. I'll work on that.

Comments may be moderated [and 'Anonymous' are usually deleted...] so please be patient if they don't appear quickly... We are cuisers. Sometimes it may be days— even weeks— before we have internet access... [Don't feel sorry for us... It's intentional...]

Topics: [Blog Posts Only. Use Search our Blog (above) to find everything else...]

Boating blogs/sites we enjoy... [An ongoing process... and in order of most recent post...]

Some forums we read...

Hail us! (We'll respond next time we have internet access- and never spam or share your info...)