It started over a week ago. We left Gus in Denali Rose by himself while we went out to enjoy an evening with friends who have a boat in our harbor. In the eight years we've lived onboard, we've left him many times this way, so as usual, we departed saying, "the helm is yours". Gus usually curls up somewhere to await our return.

This time however, when we returned, Gus was nowhere onboard. I found a port ajar, and we assumed he had popped it open, and decided to do a walkabout. He finally came home about 2:30 in the morning, soaking wet, and hungry. We'd left the companionway hatch ajar, and he came in to grab a mouthful of kibble. I heard him, got up, shut the hatch, and determined that he was wet with fresh water, not salt water. so it was probably from the rain we were having that night. Even soaking wet, and cold, he wanted to go back out, the feral switch in his brain had been turned on.

The locking mechanism must be tightened behind the metal piece. We must have tightened it incorrectly, and we found the port open enough for Gus to slip out. 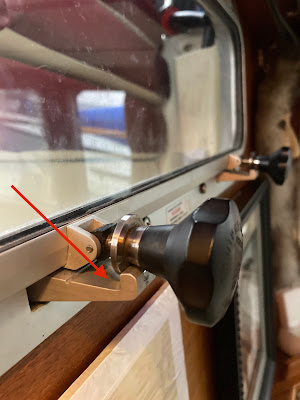 For those of you who don't know Gus, when we lived in Fairbanks, he showed up at our home one summer as a feral, and we eventually coaxed him inside by the end of October when the temperatures had dropped to -20F outside. He's a short haired kitty, and no way was he going to survive a winter outside.

Bill would feed him every evening, kibble, and two containers of warm water, he would usually inhale all of it in a matter of minutes.
Once Bill brought him inside, Gus discovered the warmth from the wood stove, and this is where he sat for quite awhile. He was very unsure about being inside the house, especially when the other two cats we already owned, were indignant at an intruder. They had all spent the summer together out on our deck, so the residents were sort of used to his presence already.

They all eventually came to terms with everyone living in peace. The white cat, is now in Seattle with my daughter, and the black cat Elsie, who also lived on Denali Rose has passed over the rainbow bridge.

In the ten years that Gus has lived with us, we found that if we let him be out after dark, his feral nature would turn on, and we would have a hard time getting him back to being a house cat. We never let the pets out at night anyway, as there were too many predators, and of course here in the marina, no way to know, see or rescue if he gets into trouble.

Back to being on house arrest.

After his foray till 2 in the morning, Gus spent the next few days yowling at us continually when we wouldn't let him out, and then when we did, he would disappear for 12 hours or more at a time. He would race out the door, leap off of the boat, and skedaddle down the docks to parts unknown. One night he came back at 10:00pm smelling of wood smoke. This led us to believe he was leaving the dock, going into the parking lot, and perhaps crossing the highway to someone's house. Enough of this!

A. The constant yowling noise has got to stop! B. No more unknown adventures to who know where!

Reading up on cat psychology, you're supposed to ignore them when they make too much noise. Don't reward the behavior by giving them what they want. Yeah, right, easier said than done! What a tremendous racket he makes!

So here's our solution.

Bill thought that maybe he would take Gus for a walk on the dock with his harness and leash, maybe Gus would lead him to where he was disappearing. We outfitted him up, and Bill took him out to the dock, it was almost funny. Gus was like, "YAY, I'm out, time to dash", but when he got to the end of the bungey leash, he boomeranged back, and it was like, "What the HELL, and NO DICE, I'm not doing this! Gus ran back inside the boat, and found a corner to pout. So far all attempts to walk on a leash have been unsuccessful, even though we used to do it all of the time.

Now whenever he starts yowling to go out, he gets his harness, and leash on, and we attempt to go for a walk. He's kind of getting the idea that yowling to go, means, yes, you can go, but only with the harness, and leash. No more mad dashes to wherever, for whatever amount of time. He's doing quite a bit of pouting. We're making sure all ports are latched, and tightened, and that he can't pry the hatch doors open, believe me, he has tried. 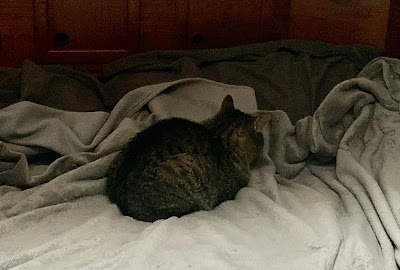 We're also tethering him to the boat, he can be out in the cockpit sitting on the cushions, but the tether will only take him to the door of the enclosure, so that he can sit on the cooler, and observe the world.

He's also become resistant to this indignity, once his harness goes on, and the clip to the tether, he sits at the companionway door, and refuses to go any further.

We're trying our best to turn off the feral switch in his brain, but it's proving to be very resistant. We want our sweet Gusters back, the one who can be trusted to sit and guard his boat, and come in for dinner when it's time.

Posted by Donna/Denali Rose at Saturday, October 29, 2022 No comments:

Email ThisBlogThis!Share to TwitterShare to FacebookShare to Pinterest
Labels: Boat Cats, She Said 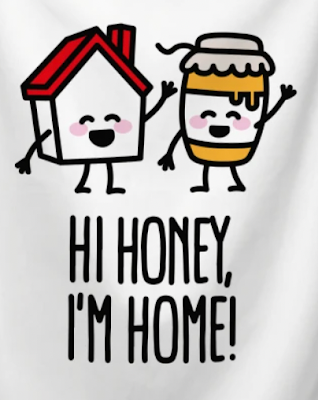 As much as we call our permanent slip in Wrangell home anyway. 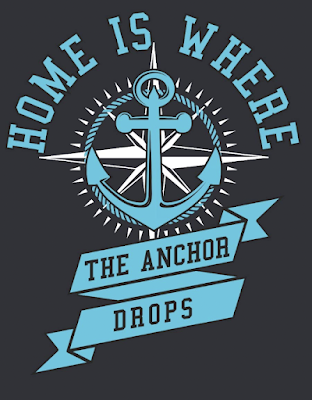 This is more our style, we usually avoid community docks, unless we have a need, ie, fuel, groceries, hardware store, beer, wine, you know, the necessary items.

I've looked back through last summers photos, and we saw quite a few beautiful sunsets. 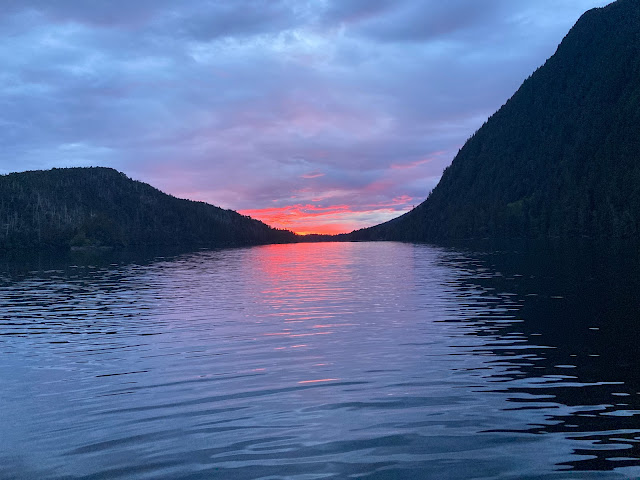 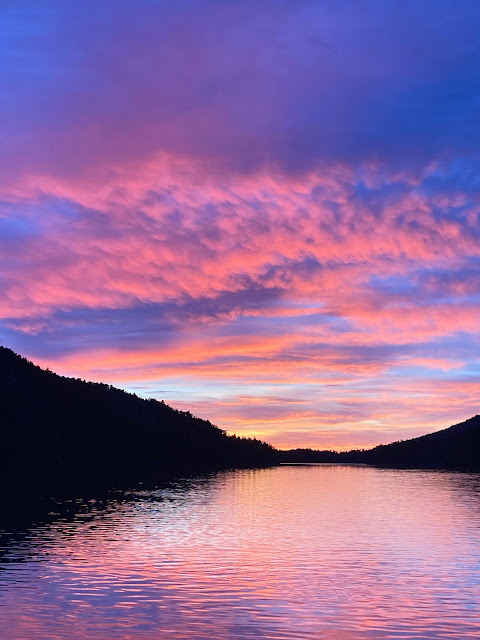 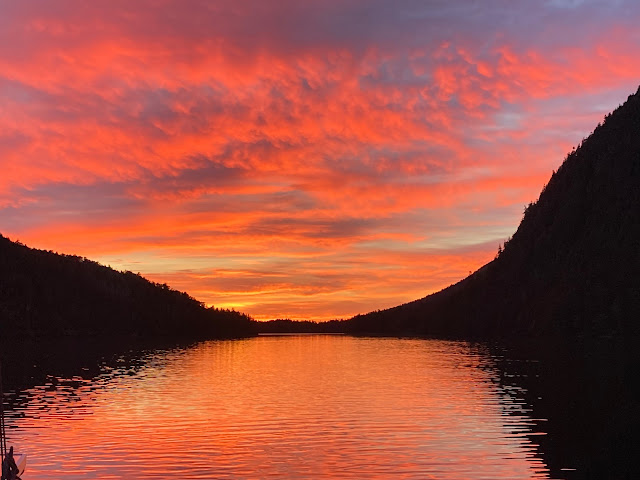 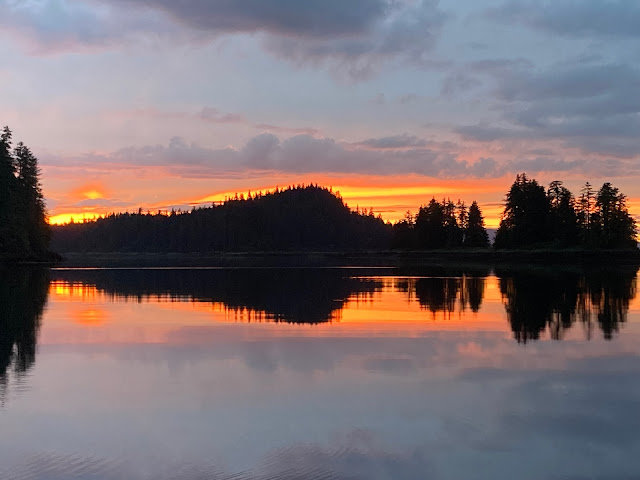 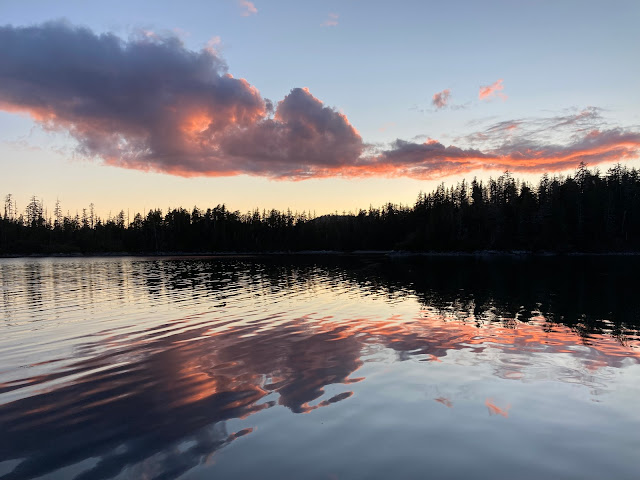 I took most of these photos with my IPhone, and I didn't even enhance the color on any of them. This was our wanderings from April to September, map taken from No Foreign Land .  Starting in Wrangell, then Sitka, outside Chichagof Island, up inside Glacier Bay Natl Park, back down to Hoonah, over to Juneau, down to Tracy Arm, over and up inside Seymour Canal, down to the Keku Islands, through Rocky Pass, and back to Wrangell.

Posted by Donna/Denali Rose at Friday, October 07, 2022 No comments:

Topics: [Blog Posts Only. Use Search our Blog (above) to find everything else...]

Boating blogs/sites we enjoy... [An ongoing process... and in order of most recent post...]

Some forums we read...